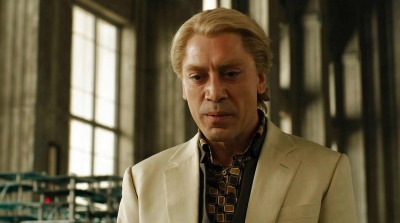 Hey everyone! (I have to laugh when I address “the people” with these posts as if anyone besides my mom and I read this blog). I thought I’d do a super quick little movie review today for Skyfall!!! I saw this film a few weeks ago but hopefully everything is still fresh!

Ok, so I thought this here movie was FANTASTIC! It was one of if not THE best Bond film I’ve ever seen. Sam Mendez, who has got to be a fucking weirdo in real life (given the motifs in his movies), knocked another one out of the park. I think the biggest reason why I loved this so much was the emotionally relatable villain. Maybe I’m personalizing on this because I have false teeth and a long history of making sexual advances at Englishmen wearing slim-fitting suits, but I had so much empathy for Javier Bardem’s character in this. And I thought every element of this story had a really solid emotional anchor to reel the audience in like a trout on a fishing line. While it may have spared a marginal level of ACTION and GOVERNMENT ESPIONAGE that people are probably used to with Bond, I thought it more than compensated for that with emotionally ripe characters (seriously, Brett…how many times are you gonna use the word ’emotional” in this ting???). Anyway, back to Bardem. That guy acted the shit out of that role. I just wanted to watch every little thing he did on that screen. If the entire movie was 143 minutes of him sitting on the toilet and picking at his feet I’d be like “pass the popcorn, he’s on!!!!”. I do have to notice though that there is always some kind of queer element in all of Sam Mendez’ villain characters. The uptight Military Colonel in American Beauty? Even Daniel Craig’s character in Road to Perdition? Come on…god forbid gay people be upstanding members of society. Sheesh that’d be silly, right? Hahahahahahahah!

And it wasn’t just Javier who kicked ass but Judi Dench as M had so much more personality here than usual. Don’t get me wrong, I always love my Dame Judi, but she can play an uptight British chick, we get it..but HERE she was so fragile and delicate and exposed you just wanted to pick up that pixie-sized patootie and take care of her forever. I’m still not sold on Daniel Craig, however…I almost get him but I’m not quite there. He just has this oily layer around him at all times. He’s too damn smarmy to be debonair. When Sean or even Pierce walked into a room, they COMMANDED a room. Like “OMFG look at that guy…he OWNS that room”. But instead it’s “Wow, this scene is gorgeous! Oh look, a questionably handsome, overly worked-out blond dude is there too”. But don’t get me wrong he’s fine. He’s adequate. He’s suffish. He does his job yadda yadda. Sometimes I just want MORE. But hey, that’s just me.

Again, because it’s my boy Sammy M, this movie looked BEAUTIFUL. When he ushered us into that casino in Macau I just wanted to take that frame, cover it honey and eat it as a snack it was so damn rich! In pretty much every new setting I would turn to David and say “I want our living room to look JUST like that…let’s make that happen”. And of course his response was always the same: “Get your hand off my inner-thigh, we’re in public”. And ugh, that scene in the hotel in Shanghai was just such a lustrous labyrinth of lavishly lush lighting (I don’t know if you noticed but that was an alliteration 🙂 I wanted to swim in it! It’s been a while since I’d seen a movie that had such a delicious visual landscape. But for every flamboyantly stylized moment like the hotel scene, they had very elegantly beautiful scenes with such an effortless lightness to them (like the bits at Skyfall towards the end). Suffice it to say I was into it.

If I were to change one thing about the film, though, I would have let that final moment where Javier gets killed linger a LITTLE bit longer. That genius moment where he says “free us both with one bullet” I wanted there to be a few final moments just pregnant as all get-out with emotion (yes, I said it again) as he SLOWLY slips away. Just let the whole film synthesize into that one moment until it fades into blissful oblivion…(who’s this uppity gasbag writing this thing? Oh, it’s me)

So, long story short: I was totally into this film and would see it again in a heartbeat. I think everyone else should see it too! Unless you have zero taste. In which case you should go re-watch a Christopher Nolan film or something. And that’s all I have to say. Ok, bye!