In a time when Beyoncé is the the most influential feminist icon for youngsters — because she Instagrammed a selfie without brushing her hair first once or whatever — and a nearly-post-Obama world where ‘Change’ and ‘Hope’ proved less dramatic and life-changing than we all thought, it’s understandable that Americans, and specifically American women, are a bit disenchanted with the prospect of what the future holds. And, in an era that’s saturated with messages exalting 201[x] as “An important time for women in [comedy, entertainment, politics, etc.],” you have to look around and say — “is it, though?” Sure, roles for women in movies are nominally more available, but they still fall victim to the widely male-dominated corporate structure that governs them. And the Reese Witherspoons of the world are having to spearhead their own Production Companies to create a richer presence of women in media (God bless her, I think). Increased awareness may portend, but not necessary aid in actualizing immediate change. And because cultural ideals tend to trickle down through the arts, it’s not hard to read between the lines of where female songwriters were in 2015; the ladies of our decade’s midpoint seem to be in an unrelenting state of, “whatever…”

Like some Sondheimian Act II moment of disillusionment, sometimes there comes a time when the thing you’re most fantasizing about becomes a reality and you’re left with the thought, “now what?” We have a black president, but perhaps the most volatile relationship ever between law enforcement and the African American community. The discourse around #blacklivesmatter might usher us into a whole new era of peaceful race-relations, who knows, but de facto, when does it really end? “You say I’m free now, that battle is over, and feminism’s over, and socialism’s over, yeah, I can consume what I want now…What are we taking care of?” sings Jenny Hval, a high-ranker on this list (oh, right, this is a list, I’ll get to that in a bit), and it casts a pretty telling net on the theme of this year’s music about/by women; Bjork just wants love and respect, Lana Del Rey just wants to get High by the Beach, Grimes just wants you to let her go and Courtney Barnett just wants to Sit and Think. This year, I’m only sticking with the gals who were putting out music in this “best of 2015” list. So, without further exposition, see below this guy’s favorite “over it” female-driven releases of 2015 —

Lana is the queen of not giving a shit, so her first-place spot on this list is almost a forgone conclusion, but barring her very obvious and immediate style, miss Del Rey has really released a wonderful record in Honeymoon. From the chilling swell of strings at the top of the titular opening track, she sets a surprisingly unnerving tone. While she croons herself stupid fetishizing some abstract but commanding bad-boy figure, you expect to ease into a lush, romanticized soundscape backing the melancholy love letter, but instead you get a hauntingly sparse peppering of tremolos that are fidget-inspiring in their dissonance against the words. In the past, Lana’s persona has always been immature and superficial, but accidentally compelling in its earnestness…a skin I’m not arguing she’s shed. BUT, with Honeymoon, the happy accident feels a little more calculated, more genuine, and more meaningful. While she still dips in and out between confessional yet disaffected ballads and “I heart boys” pop songs, the album ends and synthesizes with the judiciously covered “Please Don’t Let Me Be Misunderstood.” It may not be the most musically interesting iteration, but the premise of the song echoes much louder having followed the entire rest of the album. Lana wants us to know that she is to be taken seriously, and that she may just be a punchline to a hefty percentage of the world, but she feels very deeply and that those feelings are just as sacred as anyone else’s. Because, “god knows [she] tried” in this life. And in this record, much more than others, she is just over it all. All that’s left to do is get High by the Beach and resign yourself to “sinking into the sand.”

The album art a little bit says it all with this one. The Norwegian singer-songwriter slash avant-garde pop star, Jenny Hval, has upped her game this time around by being totally fucking done with just about everything. When she tells us, “Some days I feel like my body is a cushion held up by thin wires and I can see myself from above holding wires in my hands,” it seems that Jenny is just trying to get this often-spoken-word statement off her chest before she collapses of exhaustion. And while some of her censure of “subcultural loneliness,” among other things, teeters on the pretentious, like a teenager who just discovered Radiohead for the first time, Hval doesn’t waver for a second in her slow head shake to modern times, and the oddness and conviction eventually wins out, because Apocalypse, girl ends up being a beautiful, effective downer.

Speaking of Norwegians, Susanne Sundfør, sneaking criminally under the radar this year, put out an out-of-nowhere smash collection, Ten Love Songs, which told the story of a loud clack of heartbreak, followed by an ebbing and flowing of violence and tearful resignation that inevitably goes along with a broken heart. “This must be paradise, ’cause I am numb,” she sings in “Accelerate,” maybe the strongest track, and with remarkable poise and sonic invention, Sundfør takes you along with her through the emotional ringer as she deals with the ever-dispiriting world of modern love. Every “Love Song” on this thing sound radically different than the last, with an impressively wide range of influences and styles, but the most impressive thing about her is that she folds way too many ingredients into one, rich batter that still tastes really, really good when consumed as one. Borrowing from top-40 hits to Philip Glass, Sundfør crafts a damn fine pop record. And maybe the last song, “Insects,” ends on an eerily hopeful — albeit precarious as shit — note, it’s safe to say that in the pursuit of happiness, she is hyper-aware that times are as tough and bleak as ever.

Grimes has only somewhat been on my radar until Art Angels, which, needless to say, is really fucking good. Spurned by, what I have to imagine is just about everyone, Boucher (Grimes’ name IRL) heaves one long sigh towards every staunch male label-exec or overzealous fan in Art Angels, all while maintaining a respect for herself. She’ll “never be your dream girl,” and she really couldn’t care less. The world is oppressively stupid, and it deserves a stern dressing down in especially stupid moments. BUT, this voice of disapproval is still dressed up in a pink wig and a short dress, with its impossibly high-pitched pop vocals and dance-floor-viable melodies and beats…it’s as if to say, “Fine, who cares, I’ll do my dance for you, but I’m getting the last laugh.” It’s a deliciously smart “fuck you” and it works on every level.

Ok, I’m not insane. I’m aware this is a score written by a man for a film directed by another man that’s only about women, but this collection slides into the list very nicely if you ask me. Todd Haynes’ incredible, delicate film, Carol, which is perhaps the best film released this year, is about women being denied the privilege to live freely in the 1950s. Carol and Therese are furtive lovers in a much more politically and sexually stuffy time, who are persecuted at every turn for their relationship. **SPOILER ALERT** Ultimately Carol, after her sexual “misconduct” is revealed and then faces actual legal repercussions, and rather than sustain a loveless marriage with her husband per the agreement with the lawyers, says, “you’ve won” when she relinquishes custody of her daughter to the man. She’s just done. Conceptually, it’s not exactly a bridge too far from the world we live in. Musically, Burwell has crafted a harrowing soundtrack that borrows — steals — from Philip Glass’ canon, again, in creating its emotional world. He weaves the bleak right in with the wonder and excitement of new love in his music, and it’s highly emotive (a massive understatement). In the end, metaphorically and literally, the only way that these two women can continue to love one another is by exchanging sly glances across a crowded room. The world they live in is often unmitigated bullshit, but at least they’re not alone in it.

What’s left to be said about Bjork, given her enduring and widely-discussed career in music? Well, for one thing, after a string of pretty unmemorable releases, she’s BACK with one of her best  records, maybe ever. Following a breakup with Matthew Barney, Bjork took some time to heal, and recorded Vulnicura. What’s most refreshing about the record, is that while it’s essentially a “breakup” record, 9/10 times it skates over the anger that’s inevitably involved in the process of actually breaking up with someone. She’s certainly comfortable being vulnerable, and she certainly leaves nothing out, but she maturely shrugs at the futility in trying to make sense of it all. “Maybe he will come out of this loving me//Maybe he won’t//I’m not taming no animal.” Bjork, I imagine, has been through this before, and knows that a tantrum isn’t going to help anyone. It’s sad, it’s traumatic, it’s awful and it’s painful, but you have to deal with it. Because, of course, life is pain. She’s past getting angry about it.

7. Courtney Barnett, “Sometimes I Sit and Think, and Sometimes I Just Sit“ 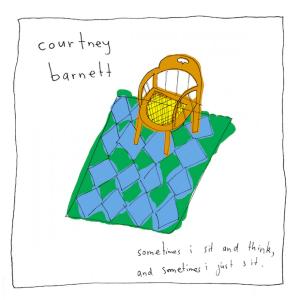 …is what I was saying a few months ago. Hailing from down under, Barnett leaps — or staggers, more accurately — into the music world with the 2015 debut. With an alt-prog-whatever-rock swagger Courtney leads a clumsy yet self-aware romp through a young girl’s existential crisis, letting all the fucked-upped-ness in at once, trying to wade her way through it without tipping over. She may not know exactly what’s going on, but she knows it’s kinda lame. But kick in that distortion peddle and we can try to figure it out together, it may be kinda fun. Barnett makes good rock and roll, even if she’ll ultimately disappoint you if you put her on a pedestal.