I don’t remember the first time I saw Cinderella, myself (the “good” version, the Disney animated version, the version that will — for better or for worse — be the stalwart ambassador for the original seventeenth century French text). But I do remember it as a redemptive tale; an empowering story of one woman’s pursuits for due recognition and respect, against the tide of other, vindictive women threatened by her beauty. Wikipedia characterizes the story as “embodying a myth-element of unjust oppression/triumphant reward,” which, for all intents and purposes, is correct. And that sounds perfectly wonderful. But in the fifty-some-odd years since the film’s release, with the second and third waves of feminism having crashed ashore in the meantime, the conventional canon of princess stories and fairy tales has ebbed away from the cultural zeitgeist and is, for lack of a better analogy, sitting semi-irrelevantly in some murky tide pool a stone’s-throw-or-so away. A movie like Frozen, a Princess story that was successful in virtually every sense of the word, danced around the tropes, but taught young girls a modern premise in a classical costume: young women don’t need men to be happy, that fear of their own power is the enemy, and that — to lean into a new argument altogether — ladies, against any impulses otherwise, need to stick together.

“Okay ladies, now let’s get in formation” mandates Beyoncé, the Gen Y successor to Gloria Steinem (just kidding lol), in her very much hit “song,” Formation. A message of solidarity amongst strong women? Sure, that’s something I think we can all get behind. BUT, does brandishing the the notion of  women-banding-together undermine the confidence or salience of a young woman as an individual?

Our cultural ideals about women, and the idea that they — if you can believe it — actually shape young girls’ capacity for success at young age, has auspiciously become an open dialog in the past few years; don’t call her bossy, don’t just tell her she’s pretty, just let her do her own thing and figure it out herself. Hurrah hurrah, as far as I’m concerned. Girls can be heroes too, lest anyone has forgotten. But there is an opposing force in all this: during one of my recent binge-a-thons of Nickelodeon’s The Legend of Korra, and the spectacular volume of advertisements that inevitably go along with it, a motif began to emerge in the very gendered marketing of children’s toys.

After the hours of Sturm und Drang trying to figure out how to disable Skylanders Superchargers ads, I eventually waved my white flag and relegated myself to be marketed to. And to my surprise, there was a perniciously coded theme in the way these products are exhibited, or rather, in the way they’re divided between girls and boys.

As Lego has illustrated in this very much girl-free ad, “You’re going to need a bigger imagination” when it comes to their using their interactive products. And, most notably, not only is it a product angled towards boys, the ad itself features but one intrepid boy, which we’ll get to shortly. But the general premise is that with Legos, anything is possible. You just have to learn to use the tools you’re given and apply your ingenuity and creativity to make a successful product and experience.

And the forward-thinking minds at Crayola have brought us another — really fucking cool, honestly — harness of innovation with their Easy Animation Studio. Where, again, young kids (boys, here) can take basic raw materials and make dynamic pieces of home-spun animation to (according to the ad, anyway) share and post online. So in essence, Crayola is selling a product that guides creative, male youngsters in generating public-facing pieces of their own resourceful craftship for online consumption. And while this particular ad features a two-boy lineup, it’s important to note that — at explicit mention — the product is designed primarily for use by an individual.

Finally, the modern, stylish, tablet-controlled world of Anki Overdrive racing cars make quite plain that a spirit of healthy competition is fun, celebrated by your contemporaries, and a natural impulse of the male gender. Because, as we’d all imagine, the second a girl gets her hands on one of those things, some sludgy mound of Sephora goop would drip onto the controls and short out the controlling tablet (gross, etc.).

Innovation, creativity, public awareness, competition and individual drive are ideals that, empirically, are the meat and potatoes of successful adults under the American ideal. So why, WHY, is this concept being sold to young kids as a gendered idea?  To turn — rather sharply — to the female side of these campaigns, there’s one subtle through-line that troublingly connects the slate of merchandise of 2016 for ladies. As you’ll eventually notice from, say, this oddly disturbing My Little Pony ad, girls’ toys are always — seriously, always — featured as being enjoyed by small groups of young girls. Whether it be some miraculously modern interactive new toy like a plastic device that makes head bands or the apparently-still-a-thing Barbie Malibu Beach House that retails for a cool $100, the ads pointed towards girls echo one message very loudly: young girls are the most happy and successful when they’re getting along with groups of other like-minded girls.

Is that the real world over yonder?

Further to the “Collective Girlhood” of the experiences in these ads, the social interaction of these girls is, starkly, a performative endeavor. Products for girls are largely cosmetic and designed to be regarded, decorated, but seldom interfaced with outside the realms or make-believe and role play. This is not a new idea, or anything that hasn’t been discussed ad nauseam, but stacked specifically against that of the boys’ products, and given the scope of available technology in 2016, why are the tools, messages and products offered towards young girls so…the-same-as-they’ve-always-been?

To roll back to the y-chromosome side of the scale, we’ve seen that boys’ merchandise is marketed to boys as individuals. This is instilling the notion that when boys grow into adults, they need only their own individual grit, drive and passion to unlock the success they desire. Whereas girls are left to aspire to, I don’t know, finding the cutest romper to rock at their husband’s office mixer.

In The Fits, Anna Rose Holmer’s stunning debut film (go see it yesterday, if you haven’t already), a young girl follows her peers into a bizarre, dark, and oddly thought-provoking moment of personal discovery. Ostensibly a bit of a tomboy, Toni (the movie’s lead and vanguard) initially spends most of her time training in the boxing ring with her brother after school. Beguiled by the neighboring girls’ dance troupe, she joins her fellow female classmates and invests her time instead to practicing their routines, and discovering her body in the process. 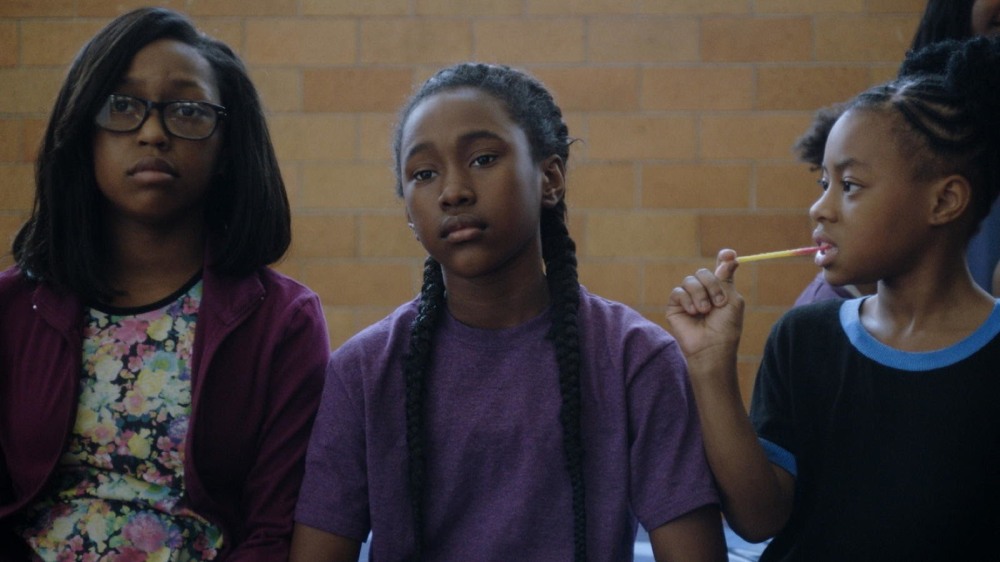 Toni and the other unseasoned underclassmen recruits are, understandably, pretty unwieldy with their bodies on the outset given their tender age, and given the rigor of the style of dance they’re practicing. But, and this is what makes the film so head-cockingly interesting, the story stays the course on Toni’s journey. While the film is about a young girl trying to fit in among her peers, nothing ever becomes about the behind-the-scenes mudslinging, or about the pressures of how vicious tween girls are. It stays honed on Toni’s pursuits, her assiduous push against the limitations of her own body, and, yes, her general rumination on how she fits in amongst other girls in her age bracket. But as Holmer has said herself, Toni is for the most part, “self-isolating” in her journey.

When the older girls in the troupe start having sudden, seemingly epileptic episodes, one by one, with no rhyme, reason, or explanation (OMG get the double-meaning with “FITS??”), the color of the story suddenly becomes darkened by fear, anxiety and anticipation. But as this mysterious seizure epidemic sweeps through each of the girls in the group, generally oldest to youngest, Toni realizes from their accounts that the “fits” aren’t necessarily a bad thing. One of the girls reports to feeling very serene during her experience with the fits. And suddenly, Toni actually wishes to get her own time at bat. And when she — inevitably  — does, it sweeps her into wave of nirvana, with surges of fantasy, ecstasy, exaltation (you get it). Toni is in fact so exalted by her experience that she physically levitates, to the astonished shock of her classmates. The film ends with this blissed-out moment of enlightenment.

Holmer on the set of The Fits

Beyond that, though, the plot/premise/allegory of the film is left pretty spaciously to interpretation. All of the boxes of the “Collective Girlhood” experience can be checked here — a young girl shaped by her desire to fit in, pursuits of performative hobbies, and ensemble characters — but what this film focalizes extends beyond the notion of girls’ inherent or conditioned gregariousness, because Toni’s journey is a personal one, a unique one, that’s set against the backdrop of peers. Her “self-isolating” odyssey is an inward-looking one, exemplified by how tightly the film follows her, both narratively and photographically. But what Toni does gain from her collective experience (assuming for now that “the fits” are rooted at least in part in the ills of puberty) is a sense of awareness and acceptance of her body, and of her womanhood, in the coming of age of it all. It’s a story about fostering an individual awakening in a collaborative context.

And this collaborative sense echoes in the filmmaking process itself, as Holmer has told Vogue:

One of the amazing things about this process has just been about defining our style of leadership, and filmmaking. When you get that chance to run a set, how are you going to run it?

The beauty of what collaboration can achieve—that’s been the most profound experience for me as a director. Embracing the collaborative aspect of filmmaking elevates the craft to a place that as an individual artist you can’t access. It’s very powerful that so many people on our team call it “my film,” “our film.” That makes me the most proud.

So, in watching Toni’s “collective” coming of age, thinking about collaboration as a pervasively female practice, and looking at The Fits as among the most well-received films of the year while being helmed by a first-time female director in an industry with such a talked-about dearth of female directors, I think it’s safe to say there’s something we can learn here. In a near-future that’s looking to be dominated by emerging entrepreneurship, crowdsourcing, and ever-proliferating technology that makes remote collaboration more viable, maybe we can take a cue from the T-shirt and assume the future really is female. Perhaps the ruthless, dog-eat-dog quest for a one-captain ship is being outmoded, and perhaps Cinderella’s beauty-shaming evil Step Sisters have had time to change their tune in support of their ilk.

Anna Rose Holmer is well on her way to joining a new age of filmmaking auteurs, but she certainly didn’t do it alone.