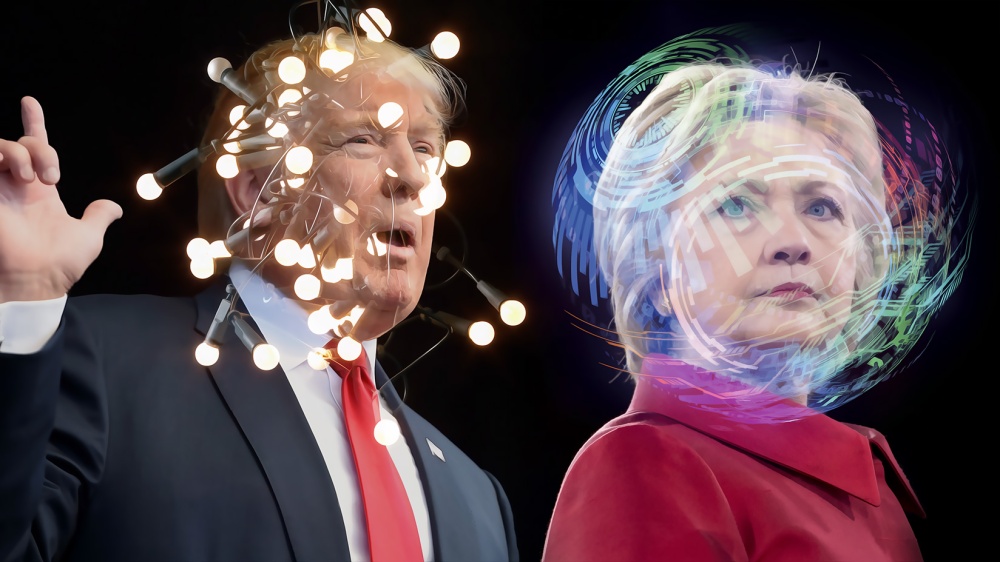 I have to say, and I don’t think I’m alone here, that November 9th, 2016, truly, TRULY can’t come soon enough. In late-October — three-or-so weeks off from election day — it’s hard to pay your DWP bill without being browbeaten into thinking about the two major-party nominees, let alone watch or read any news coverage without missing it. Which, sure, in a democratic state, I’d say that’s more or less de rigueur. But when the discourse around our party nominees is a sloppy, low-blowing melee, wherein our subjects’ reputations have become so soggy from sex scandals, slut-shaming, and security-breaching, where is the space for real, tried-and-true American Politics?

We’re in a two-party system. No way around that. And fatigue from all the petty barb-trading by Donald and Hillary (mostly Donald, LBH) is not a new thing, or an original sentiment. But on a core level, there’s the notion that when you stand with your chosen candidate, you’re beholden to that alliance. They’re your candidate, and attacks to their reputation or their character are indirectly (or directly) an attack on you, by virtue of your choices. So, with our two emissaries marching towards Capitol Hill with our personal wish-lists in-hand, hypothetically, do we (Americans) have the proper capacity to educate ourselves on the nuance of what they really believe in, and are we properly pragmatic in aligning with the right candidate to begin with?

The United States — America, for the less politically-correct among us — being predicated on the idea of personal freedom, freedom of expression, and non-hegemonic religious acceptance, cultivates the unfortunate byproduct of entitlement. What we want and what we believe, regardless of reason or motivation, is sacred. So there’s no real way to standardize what merit any one person has for their convictions. One individual might vet a candidate on their policy and experience, and come to an educated, “rational” decision. Another candidate may look at Hillary (say), see she’s a woman, and divert their faith to ‘the other person’ because they don’t like a woman in charge. Is one more or less valid than the other? I don’t know who’s at liberty to make that call. And this all roots back to the fundamental problem that, politics is just a Federally-sanctioned language to discuss and justify emotionally-driven decisions. Because, if emotions had no part to play in it, I’m sorry, Hillary wouldn’t be so pervasively hated–Sure, her reputation may not be squeaky-clean, but for crying out loud, how did she inherit the “crooked” moniker? And if you bring up the email scandal one more time — that was Federally investigated and cleared, mind you —  I may disintegrate into white sand. Let’s be honest: huge swaths of people vehemently oppose Hillary because she’s a woman. BECAUSE SHE’S A WOMAN.

But Donald trump has built a campaign on fear, paranoia, and hatred. These, unless I’m mistaken, are emotional concepts. And I seriously doubt, for example, this woman is read on the teachings of Islam in motivating her bigotry (I could be wrong). I don’t know for a fact that this woman’s a Trump supporter, but I seriously doubt she’s live-tweeting about Lena Dunham/American Ferrera’s killer intro patter at the DNC. Folks’ political affiliations are in part (at the very least) an emotional decision.

SO, in 2016, when the headlines about Donald Trump are virtually never about his policies or professional wherewithal (assuming that’s a thing) — based instead around his generally cantankerous (awful) personality and sexual subterfuge — how are we supposed to maintain integrity when discussing the election? We’re tasked instead with defending the character of our chosen representative, which is very much an imperfect science. Their dirty laundry is on trial, not their ideas. And, perhaps worst of all, because the discourse is floating at some top-level-yet-lowest-common-denominator realm, none of the fine-print of their plans are under a microscope. It’s a pumped-up pissing contest, not a meeting of the mind(s).

Partisanship under this two-party system has always been an issue, but what this particular election dredges up is just how hopelessly bogged down we are in bonding to one of the two available poles of those two parties based on their personality. You’re with her, or you’re with him. And never the twain can meet. But people, who are arguably emotionally-driven beings, have so much more capacity for thought beyond “he’s right” or “she’s right.” But, to hammer this idea down, where are the people between the partisanship? Because running a country is a President’s job. Appointing a president is our job. And regrettably, it’s become clear that the American people don’t have the right tools to do their jobs. Because when political campaigns appeal to such base emotions, and when BOTH of our only two candidates are so horrendously unpopular, what functionality of American Democracy remains? The democratic process becomes merely procedural.

And if the notion of emotionally-driven voters seems like a stretch, it should be evident in the fact that Donald Trump is absolutely fucking incapable of tanking his campaign — his dreadful, clumsy, inept little campaign — and still maintains his loyal fanbase. Trump speaks to his supporters on such a base, emotional level, that only pieces of information that his followers need to solidify their support is that–

And because he’s been able (allowed) to normalize bigotry, xenophobia, and bonafide ignorance, there’s no obligation to civilize the process of his election. Decorum is no longer a requisite, it’s an option. And logic and reason is only marginally relevant here.

So, without being able to codify the intellectual process behind voting, and with political fortitude being tantamount to any gut/irrational impulse on paper, what tools are left for a democratic population to mobilize their collective/majority ideals?

It may have taken a painful, embarrassing, and disgraceful election cycle to make clear just how flawed our democratic process is, but it may take something even more radical to actually improve the system. And, with two candidates so bereft of radical, fresh ideas, we may be stuck for a while. If only people were allowed to, for lack of a better expression, think for themselves. I think us Americans are capable of way more.